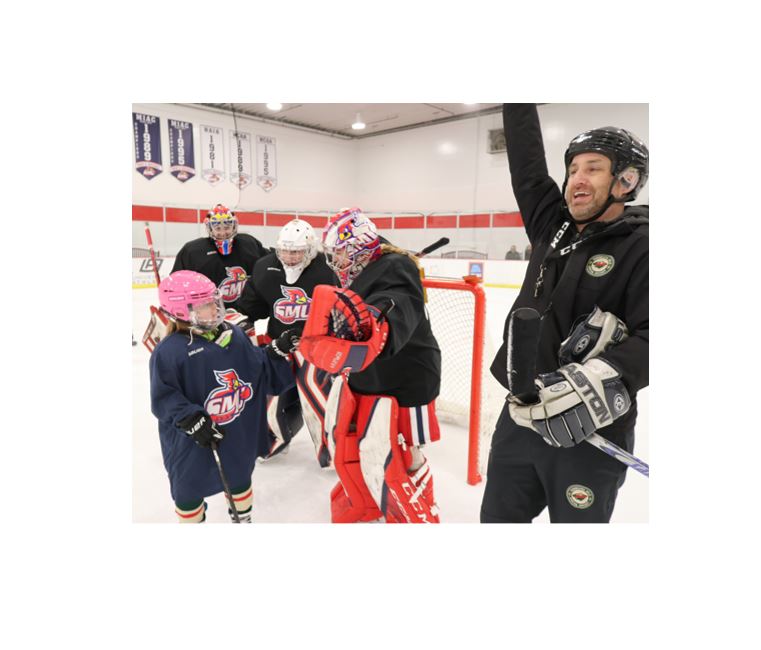 At the home game against St. Catherine Feb. 5, the Saint Mary’s women’s hockey team and coach Sarah Murray were cheered on by the Special Hockey Team of Rochester (www.mnspecialhockey.org), a stand up ice hockey program for athletes of all ages and abilities, affiliated with the Minnesota Wild, and their coach Colin Thomas.

Following the game, these special guests enjoyed a “Skate with the Cardinals” and a pizza party. The experience was fun and enriching to members of both teams who share a common love of the sport.

Coach Thomas called it an “absolutely incredible event” and added, “It was so heartwarming to see the giant smiles from both teams. Senior Goaltender Jordan Keeley agreed: “It was an incredible experience for everyone involved. The whole scrimmage all you could see were hugs and smiles on everyone’s faces. The night was filled with kindness, learning, and happiness, and it was incredible to be a part of it.”

This event is part of a longer-term goal of the women’s hockey program, to create a program called “Cardinal Crew,” similar to the Special Hockey Minnesota Adapted Hockey Program in Rochester. To this end, Coach Murray and her team are also assisting at the Special Hockey Rochester’s team practices on Sundays.

The event was made possible in part through the “Athletics and Character Grant” sponsored by the new Office for Character, Virtue, and Ethics. The inauguration of this grant was inspired by a presentation last April by Dr. William Thierfelder, president of Belmont Abbey College in North Carolina, entitled “Sport, Virtue, and Excellence.”

This year, Women’s Hockey was only one of two Cardinals’ teams to receive this grant, the other being Men’s Baseball under the leadership of coach Nick Winecke. Their winning grant proposal sums up their goal to develop the “whole player:” “By working with and coaching people who have disabilities, our players will continue to develop empathy, humility, gratitude, and growth through servant leadership. They will learn to appreciate and celebrate the diversity that exists in the world.”

Saint Mary’s Director of Athletics Brian Sisson praises their extraordinary efforts amidst the challenges of the pandemic. “Kudos to Sarah, her staff, and our student-athletes,” he said. “It has not been easy, but they have been determined to carry this out and leave a lasting impact on others.”

Take two minutes to confirm that you are registered to vote. END_OF_DOCUMENT_TOKEN_TO_BE_REPLACED

Learn more about the Saint Mary's M.A. in Philanthropy and Development END_OF_DOCUMENT_TOKEN_TO_BE_REPLACED

Career Services has launched the 2022 First Destination Survey for the School of Graduate & Professional Programs. END_OF_DOCUMENT_TOKEN_TO_BE_REPLACED